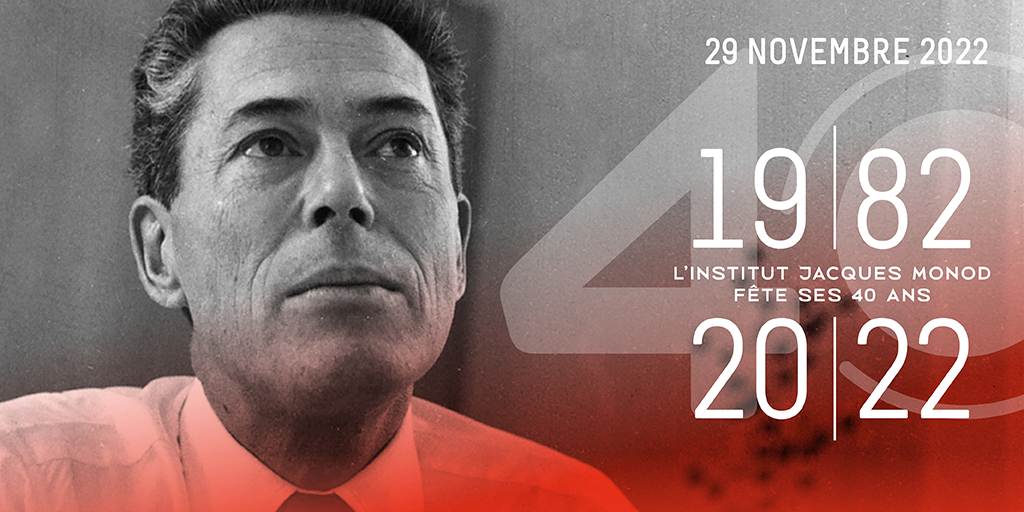 The Institut Jacques Monod will celebrate on 29 November the 40th anniversary of its nomination in honour of Jacques Monod.

Founded in 1966 by Jacques Monod and François Jacob as the Institut de Biologie Moléculaire, François Chapeville, then director, proposed in 1982 to rename it the Institut Jacques Monod. This prestigious filiation makes the Institute a unique place where high-level interdisciplinary fundamental biology research can develop without hindrance, supported by a human, instrumental, technical and administrative environment of very high quality. The long history and continuous development of the institute would not have been possible without the constant and attentive support of its two supervisors: the CNRS and the Université Paris Cité (formerly Université Paris-Diderot).

During this day of conferences, testimonies and reunions, several scientists will speak about Jacques Monod, the institute and the science that is built there every day. Laurent Loison, historian and philosopher of life sciences, will talk about the scientific work of Jacques Monod. Then, a round table will bring together several remarkable scientists who will talk about the research they have carried out at the Institute. Catherine Jessus will also give a talk on her vision of the role of the Institute in the advances of biology in the 21st century. Two researchers from the Institute will present part of their work. Nicolas Minc, winner of the Coups d’élan Prize of the Bettencourt Schueller Foundation 2020, will talk about geometry and cell division, while Sandra Duharcourt, CNRS Silver Medal 2022, will explain the contribution of paramecia to genome dynamics.

Finally, this day will be an opportunity to inaugurate the new equipment of the proteomics and photonic microscopy platforms, the acquisition of which was made possible thanks to major financial support from Université Paris Cité, the CNRS, the Bettencourt Schueller Foundation and the Ile-de-France Region.

All the collaborators of the institute, researchers, teacher-researchers, students, technical and administrative staff will be happy to welcome you on this occasion.