In the past years, our main findings were:

-Deciphering the molecular mechanism of glucose-induced endocytosis. The yeast AMPK (5’-AMP activated kinase) orthologue, Snf1, is active in the absence of glucose, leading to the phospho-inhibition of the ART Rod1 (aka Art4). Glucose addition leads to Rod1 dephosphorylation in a protein phosphatase 1 (PP1)-dependent process, allowing its subsequent ubiquitylation by Rsp5. This is the glucose-specific, active form of Rod1 that is competent for endocytosis and will promote glucose-induce endocytosis (Figure 1). For more details, see Becuwe et al., J Cell Biol 2012. 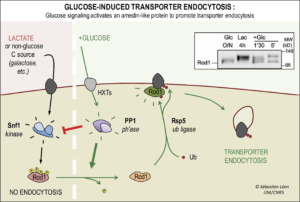 Figure 1. Molecular mechanism of glucose-induced endocytosis. The post-translational modifications on the arrestin-related protein Rod1 are regulated by glucose availability and control its activity in glucose-induced endocytosis. Inset: Western blot showing drastic changes in the migration pattern of Rod1 when cells are transferred from glucose medium (lane 1) to lactate medium (lane 2) and then back again to glucose (lanes 3 & 4).

– ARTs can act at other places than the plasma membrane and a novel role of the trans-Golgi network (TGN) in the control of endocytic decisions. We showed that some transporters, after endocytosis, are targeted in a retrograde pathway from endosomes to the TGN, from where they can either recycle to the plasma membrane or pursue their path to the vacuole/lysosome. The latter (degradative) pathway requires transporter ubiquitylation at the TGN in a Rod1-dependent manner (Figure 2). Accordingly, Rod1 is partially redistributed to the TGN upon glucose addition, in a very dynamic fashion (Movie 1). For more details, see Becuwe & Léon, eLife 2014

Figure 2. Dual function of Rod1 in the regulation of transporter endocytosis and recycling.

In lactate medium, Jen1 is synthesized and targeted to the plasma membrane. Rod1 is inactive (phosphorylated) and cytosolic. Upon glucose addition, Rod1 is activated and promotes transporter internalization at the plasma membrane (1), but also localizes to the TGN (2). There, Rod1 controls the fate of (i) internalized transporters that have been retrograde-trafficked by a VFT (Vps Fifty-Three)- and Ypt6-dependent pathway, and (ii) transporters coming from the secretory pathway. Transporter sorting from the TGN to the vacuole requires Rod1 and the clathrin adaptors Gga1 or Gga2 (GGAs). Upon glucose removal, shortly after endocytosis is initiated, Rod1 can be re-phosphorylated leading to its dissociation from the TGN and Jen1 recycling to the cell membrane. © Sébastien LEON, CNRS/IJM

– Functional cooperation within the arrestin family. The detailed study of Jen1 endocytosis in response to glucose by microfluidics (previous paragraph) suggested a probable redundancy between Rod1 and a then unidentified arrestin. We found that the arrestin named Bul1 can partially compensate for the absence of Rod1 at the plasma membrane, but in contrast it cannot substitute for its identified functions at the TGN (Figure 3). Post-translational modifications of Bul1 are regulated by the presence of glucose via a PP2A-type phosphatase. This indicates a functional cooperation between several ARTs at successive compartments during endocytosis, participating in the robustness of the response. For more details, see Hovsepian et al., Mol Biol Cell 2018 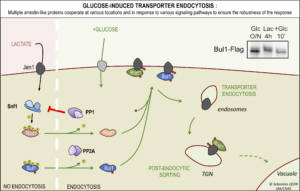 Figure 3. Rod1 and Bul1 arrestins together cooperate for Jen1 endocytosis in response to the presence of glucose. © Sébastien LEON, CNRS/IJM

-Mechanism of glucose transporters endocytosis during glucose removal. When studying the effect of glucose depletion, we found that several glucose transporters are endocytosed in a process dependent of the ART Csr2 (aka Art8). Csr2 expression is regulated by Snf1/AMPK at the transcriptional level, and is thus the first yeast ART to be induced in conditions of endocytosis of its cargoes. Csr2 ubiquitylation is also essential for its activity and occurs at a site conserved in many other ARTs. Csr2 is deubiquitylated upon glucose addition, likely to inhibit its function, in a process that involves its phosphorylation, protein kinase A (PKA) and 14-3-3 proteins (Figure 4). For more details, see Hovsepian et al., J Cell Biol 2017 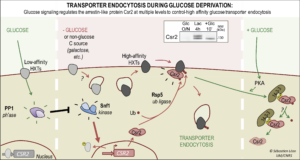 Figure 4. Regulation of the ART Csr2 by glucose availability. Left, In the presence of glucose, CSR2 is repressed by the transcriptional repressors Mig1/Mig2. Upon glucose removal (center), Snf1/AMPK activation leads CSR2 derepression. Csr2 is constitutively ubiquitylated by Rsp5 on a conserved lysine. Right, upon addition of glucose to the medium, Csr2 becomes phosphorylated in a PKA (protein kinase A)-dependent manner and an increased, phospho-dependent association of Csr2 with the Bmh1/2 proteins (14-3-3) is concommitant with its deubiquitylation. Csr2 is also subject to proteasomal degradation. Inset : Western blot showing changes in expression and post-translational modifications of Csr2 when cells are transferred from glucose medium (lane 1) to lactate medium (lane 2) and then back again to glucose (lane 3). © Sébastien LEON, CNRS/IJM

In the course of studying the effects of the metabolic inhibitor and glucose analogue, 2-deoxyglucose (2DG), on membrane trafficking, we characterized the effects of this drug on the cellular proteome. These results reveal that 2DG causes overexpression of phosphatases that dephosphorylate the phosphorylated and toxic form of 2DG, 2DG-6-phosphate. We have shown that 2DG causes a number of cellular stresses and triggers the activation of several signaling pathways (MAPK, UPR) that allow the induction of these enzymes in charge of detoxifying 2DG6P (Figure 5). Characterization of spontaneous yeast mutants that have become resistant to 2DG by sequencing their genomes revealed that the phosphatases studied participate in the resistance strategies of most of these mutants. A similar enzyme, named HDHD1, has been identified in humans. Its overexpression protects a human cell line from 2DG-induced cell death. This discovery suggests that overexpression of HDHD1 in certain tissues or tumors could modulate their sensitivity to 2DG, but also interfere with the detection of certain tumors by existing imaging methods based on 2DG derivatives. For more details, see Defenouillère, Verraes et al. (2019) 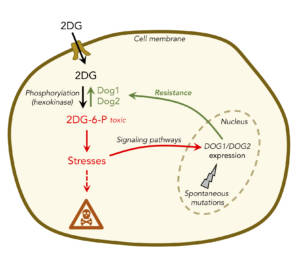 Figure 5. 2DG is imported into cells and metabolized to 2DG-6-phosphate, which is toxic. This leads to several stresses in the cell, some of which will result in the expression of enzymes called Dog1 and Dog2 that can detoxify 2DG6P. In addition, spontaneous mutations can lead to 2DG resistance in cells, including overexpression of Dog1/Dog2.  © Sébastien LEON, CNRS/IJM