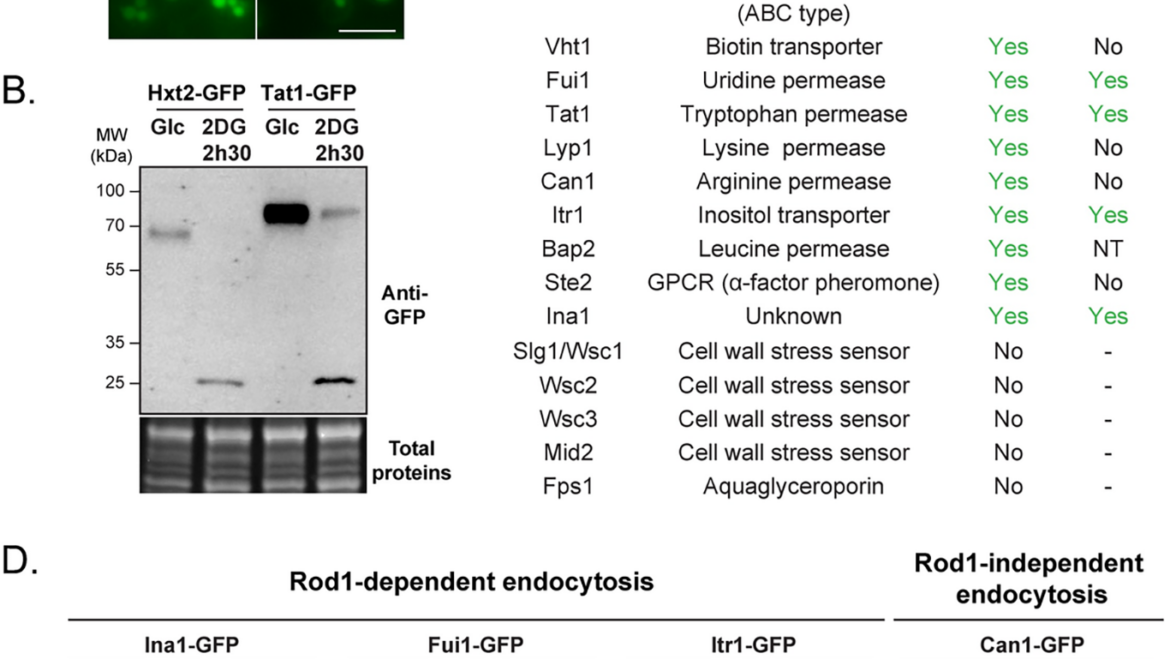 2-deoxyglucose is a glucose analog that impacts many aspects of cellular physiology. After its uptake and its phosphorylation into 2-deoxyglucose-6-phosphate (2DG6P), it interferes with several metabolic pathways including glycolysis and protein N-glycosylation. Despite this systemic effect, resistance can arise through strategies that are only partially understood. In yeast, 2DG resistance is often associated with mutations causing increased activity of the yeast 5’-AMP activated protein kinase (AMPK), Snf1. Here we focus on the contribution of a Snf1 substrate in 2DG resistance, namely the alpha-arrestin Rod1 involved in nutrient transporter endocytosis. We report that 2DG triggers the endocytosis of many plasma membrane proteins, mostly in a Rod1-dependent manner. Rod1 participates in 2DG-induced endocytosis because 2DG, following its phosphorylation by hexokinase Hxk2, triggers changes in Rod1 post-translational modifications and promotes its function in endocytosis. Mechanistically, this is explained by a transient, 2DG-induced inactivation of Snf1/AMPK by protein phosphatase 1 (PP1). We show that 2DG-induced endocytosis is detrimental to cells, and the lack of Rod1 counteracts this process by stabilizing glucose transporters at the plasma membrane. This facilitates glucose uptake, which may help override the metabolic blockade caused by 2DG, and 2DG export—thus terminating the process of 2DG detoxification. Altogether, these results shed a new light on the regulation of AMPK signaling in yeast and highlight a remarkable strategy to bypass 2DG toxicity involving glucose transporter regulation.