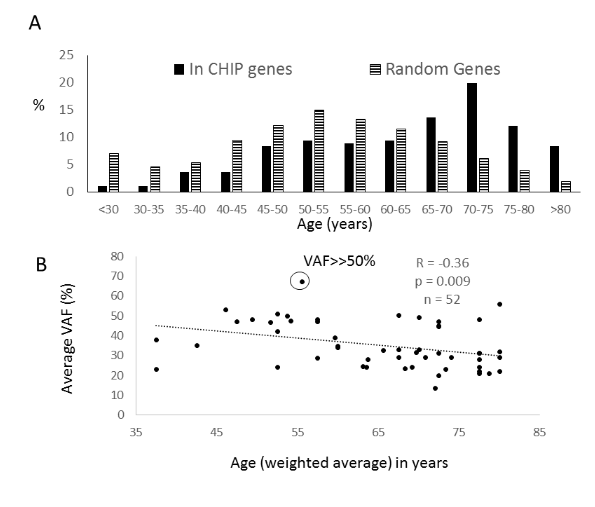 Clonal hematopoiesis (CH) consists in an abnormal expansion of a hematopoietic stem cell bearing an advantageous somatic variant. A survey of known recurrent somatic missense variants in DNMT3A, SF3B1, SRSF2 and TP53, some of the most prominent genes underlying CH of indeterminate potential (CHIP), in gnomAD non-cancer database shows the presence of 73 variants. Many of them reach frequencies higher than 0.01% in various populations and, in many cases, are enriched in specific populations. Consistent with their involvement in CHIP, we found that the age distribution of the carriers is shifted towards old ages. Moreover, the variant allele frequencies (VAFs) are on average lower than 50%, expected for germline heterozygous variants. The pervasive presence of such variants in blood DNA from elder individuals is compatible with CHIP of somatic origin. On practical grounds, CHIP can lead to misclassification of somatic variants in cancer-predisposition genes as inherited, which bear consequences for the affected individual and his/her family.