Our team seeks to determine the adaptation strategies of cells to nutritional stresses, such as nutrient deficiencies or inhibition of metabolism. Our theme is at the intersection of cell biology, cell signaling and metabolism, using the yeast Saccharomyces cerevisiae as a model.

1/ REGULATION OF ENDOCYTOSIS BY THE NUTRITIONAL STATUS OF THE ENVIRONMENT 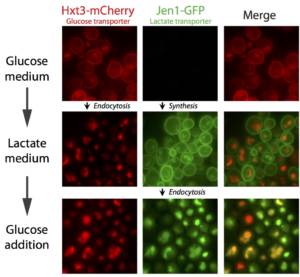 2/ TOXICITY OF A METABOLIC INHIBITOR, 2-DEOXYGLUCOSE, AND ASSOCIATED RESISTANCE MECHANISMS

Click here for a summary of our recent research.