Stem cells, which are able to both self-renew and produce a differentiated progeny, are crucial players of animal embryonic development. They are also involved in post-embryonic processes such as growth, tissue homeostasis, as well as, in some animals, asexual reproduction and regeneration. Regeneration, the ability to restore lost parts of the body, is a widespread phenomenon in animals (reviewed recently in Bideau et al., 2021). Whilst this ability is very limited in mammalians, many animals (such as sponges, cnidarians, planarians, annelids, and salamanders) are able to regenerate complex structures, limbs for example, and in some cases their whole body from a small piece of tissue. Regeneration is often based on the presence of populations of stem cells, either pluripotent and able to regenerate all the different tissues, or multipotent and with a much more restricted potential. Regeneration can also rely on local cell dedifferentiation processes by which differentiated cells are reprogramed into proliferating progenitor or stem cells.

Our team is interested in understanding the evolution of stem cells and regeneration in animals. Our main model to address these topics is the marine annelid Platynereis dumerilii (Figure 1). 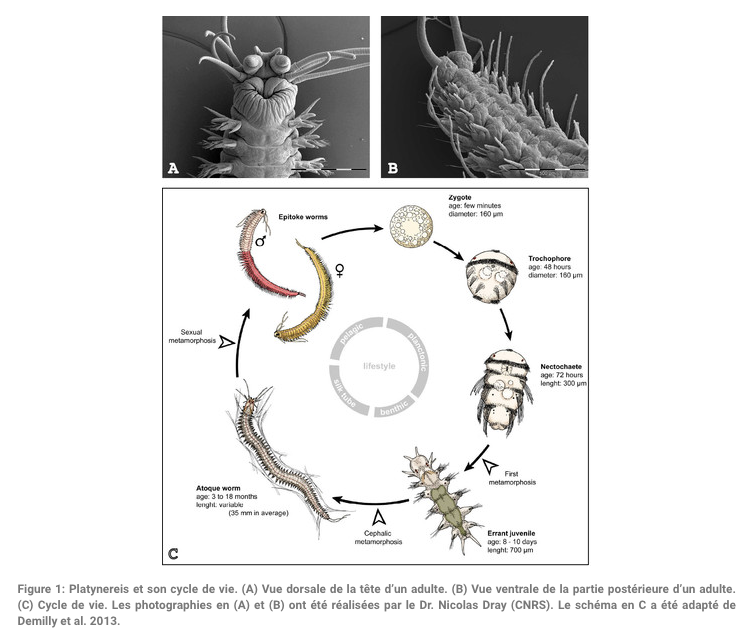 Annelid worms belong to lophotrochozoans, the third large evolutionary lineage of the bilaterians, alongside deuterostomes (vertebrates, echinoderms, …) and ecdysozoans (arthropods, nematodes, …). Platynereis has been shown to be extremely valuable for large-scale evolutionary comparisons and is amenable to molecular and functional analyses. After embryonic and larval development, Platynereis worms grow during most of their life, by sequentially adding new segments at their posterior end: a process known as posterior elongation. We showed that this property is linked to the presence of putative stem cells located in a subterminal ‘growth zone’ (GZ) (Gazave et al., 2013). GZ stem cells display a molecular signature (made of the expression of about 20 genes) similar to that of pluripotent stem cells found in other animals and that of primordial germ cells.

During this growth phase, Platynereis worms also display extensive regeneration abilities. After amputation, Platynereis regenerates the posterior part of its body that includes both the differentiated structures of the posterior-most part of their body and the GZ stem cells whose proliferation allows the replacement of the amputated segments. We performed an in-depth characterization of this regenerative process, which we called posterior regeneration (Figure 2) (Planques et al., 2019). We showed that regeneration is a rapid process that follows a well reproducible path and timeline, going through specific stages. Wound healing is achieved in 1 day and a regeneration blastema forms 1 day later. At this time point, some tissue specification already occurs, and a functional posterior growth zone is re-established as early as 3 days after amputation. We also showed that intense cell proliferation occurs and is strictly required for regeneration to normally proceed.

In addition to its posterior body region, Platynereis worms can also successfully regenerate various types of body outgrowths, in particular their swimming/crawling appendages called parapodia. Platynereis is, in contrast, not able to regenerate its head after an amputation. While the worms can survive for many days after head amputation and a regeneration blastema is formed, the anterior blastema never produces any differentiated head structures (abortive regeneration).

Figure 3: EdU labeling points out proliferating cells in Platynereis. EdU labeling (red) and Hoechst nuclear staining (blue) are shown. (A) Whole worm EdU labeling with 5h EdU labeling 24h after amputation (anterior is on the left). Many EdU+ cells are found throughout the body. (B) Higher-magnification view of the posterior part of the worm shown in (A), highlighting the presence of EdU+ cells in the regenerated region. (C) Posterior part of a worm after a 48h chase in normal sea water. Many EdU+ cells are found in the regenerated region. Images are from Planques et al., 2019.

Using a variety of approaches, we aim to better understand the amazing regenerative abilities of Platynereis and identify possible conserved mechanisms and genetic programs that underlie regeneration in animals. We also study the evolution of stem cells in animals. More specifically, our research projects are organized around five major axes:

(i) Origin(s) and fate(s) of the cells of the regeneration blastema in Platynereis. We obtained evidence that blastemal cells mainly derive from dedifferentiation of cells of the tissues abutting the amputation plane, which start, shortly after amputation, to express proliferation and pluripotent stem cell markers, suggesting that amputation induces extensive cell reprogramming towards a progenitor/stem cell identity (Planques et al., 2010; Bideau et al., in preparation). We are developing cell lineage and single-cell RNA-seq approaches to further characterize the dedifferentiation process and assess the identity and fate of the blastema cells.

(ii) Pathways involved in the initiation and control of posterior regeneration in Platynereis. We test the hypothesis that apoptosis and the production of reactive oxygen species (ROS) may be important to trigger regeneration, notably by stimulating cell proliferation required for regeneration, based on the knowledge obtained in other regenerative animals (reviewed in Vullien et al., 2021). We also study the potential role(s) of signaling pathways during regeneration and already identified two pathways (Notch and Wnt/beta-catenin) that are required for proper regeneration.

(iv) Epigenetic regulations during Platynereis regeneration. We obtained transcriptomic data that indicate that a large number of genes are differentially expressed during regeneration. We tested the hypothesis that epigenetic regulations may be involved in these dramatic changes in gene expression that occur after amputation. We obtained evidence for the involvement of DNA methylation and some histone modifications during regeneration (Planques et al., 2021; Schenkelaars et al., in preparation). We use epigenomic approaches (e.g., ATAC-seq and Cut&Tag) to further characterize this involvement and identify the gene regulatory network that sustains regeneration in Platynereis.

(v) Evolution of stem cells in animals. We previously showed that the growth of Platynereis worms relies on the presence of posterior stem cells that expressed pluripotent/germ stem cell markers (Gazave et al., 2013). We aim to define whether stem cells with a similar molecular signature might be present in other animals that progressively elongate their body, as Platynereis does. With this aim, we have started to study body growth in a chordate, the amphioxus Branchiostoma lanceolatum, and also plan to characterize growth in crustaceans. We are also characterizing how stem cells evolved in animals by defining and comparing the molecular signatures of a large variety of stem cells from different animals using published transcriptomic data.