The main objective of the research carried out by our team is the study of ovarian function through molecular genetics. A historical subject of the group has been the analysis of the Blepharophimosis syndrome (craniofacial anomalies and premature ovarian insufficiency or POI), due to alterations in the transcription factor FOXL2. Over the years, we have contributed to a better understanding of the molecular function of FOXL2, its mechanisms of pathogenicity and the discovery of numerous targets and partners. FOXL2 provides an excellent model to study the combinatorial regulation of transcription, as it modulates a series of apparently unrelated processes (e.g. cholesterol and steroid metabolism, apoptosis, cell cycle, free radical detoxification, etc.). Thus, we use FOXL2 as a model to explore the basis of specific target recognition by a transcription factor and the influence of its partners and post-translational modifications on this process. To do so, we use state-of-the-art genomics and proteomics tools. 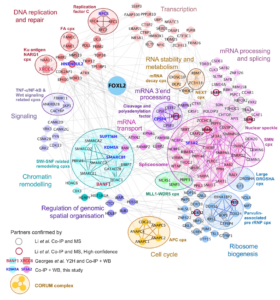 FOXL2 has also opened an avenue of research into ovarian granulosa cell tumors (GCTs), which account for up to 8% of all ovarian cancers. Two distinct subtypes of GCTs have been described: juvenile and adult forms. The adult type occurs most often during perimenopause and is characterized by late recurrence (up to 40 years after treatment of the primary tumor). The juvenile form (JGCT) tends to occur in the prepubertal period. A recurrent somatic mutation in FOXL2, leading to the p.C134W substitution has been detected in more than 97% of AGCTs, suggesting that this mutation is a driver of their formation. We are actively investigating the pathogenic mechanisms of this mutation using CRISPR-Cas9 modified cell lines, an animal model and genomic tools.

The molecular basis of JGCT is less well understood. We recently found tandem duplications in the reading frame of the AKT1 oncogene that affect the pleckstrin-homology domain (PHD) of the protein in over 60% of JGCTs. The effects of these mutations are currently being studied in cell and Drosophila models. 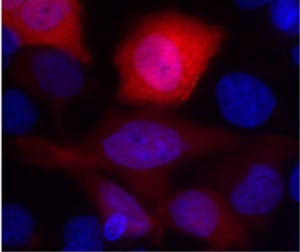 Finally, we are taking advantage of the power of current genomic technology to discover new genes involved in female infertility due to POI, by performing exome sequencing in familial and isolated cases of this disorder. The functions of candidate genes discovered in these analyses are or will be studied using molecular approaches and animal models.

Sources of funding other than the recurrent grant: 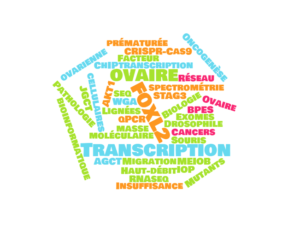