Our laboratory studies the establishment of cell fates through two major projects. First, we are exploring how neuronal diversity emerges in the embryonic spinal cord. Secondly, we are investigating the means by which gene networks linked to PAX factor activity control tissue remodelling. Both projects have implications for our understanding of two childhood diseases, rhabdomyosarcoma and spina bifida. These projects are mainly approached using spinal cord organoids that we generate from pluripotent stem cells. These are models that recapitulate the physiology of tissues, including human ones, and are highly malleable, allowing in particular the implementation of genetic engineering and pharmacological approaches. 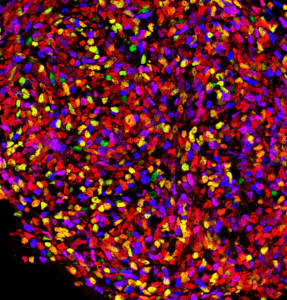 The stereotypical organisation of neuronal diversity in the spinal cord is astonishing and is essential for the function of motor and sensory circuits. Hundreds of neuronal subtypes are generated at a specific location along the anteroposterior and dorsoventral axes of the neural tube. The correspondence between cell coordinates and cell fate is ensured by the combined action of secreted signalling molecules, such as Shh or BMP morphogens, and intrinsic cell fate determinants, including PAX transcription factors. Together, they are responsible for the generation of banded patterns of gene expression, organised along the orthogonal axes of the developing neural tube. 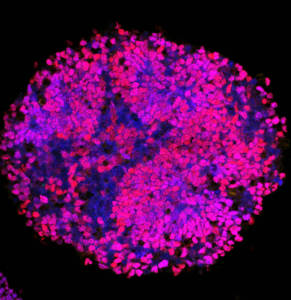 We are interested in how these gene expression bands are generated and how they are translated into specific cellular behaviours and states. In particular, we are paying close attention to the modulation of the transcriptional activity of PAX factors. They are able to both activate and repress gene expression and this bivalence is regulated in space and time. We are investigating how pleiotropism in PAX activity is generated and read out at the genome level and which structural protein partners and domains support this pleiotropism. 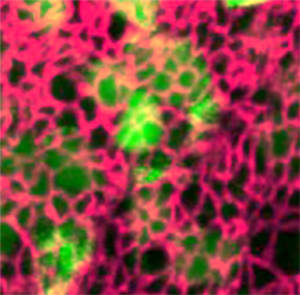 The dynamics of cell shape within epithelia underlie the morphogenesis of many organs. The same is true for the formation of the spinal cord, which is accompanied by extensive remodelling of its pseudostratified epithelium. These include the bending and fusion of the caudal neural plate into a tube, the epithelial-mesenchymal transition (EMT) of the dorsal neural crest cells (NCC) and the delamination of early born neurons.

All of these events are under the control of PAX3 and PAX7 protein activity and disruptions in PAX activity in humans can lead to pathological conditions. These include spina bifida, a congenital disease resulting from a neural tube closure defect, or the metastatic behaviour of rhabdomyosarcoma. Hence our interest in understanding the means by which PAX activity and associated gene networks are able to generate diversity in epithelial cell shape and behaviour.