Nuclear Pore Complexes (NPCs) are elaborate structures embedded in the nuclear envelope and composed of multiple copies of about 30 different proteins termed nucleoporins (Nups). Our team aims at characterizing, beyond their well-established function in transport between the cytoplasm and the nucleus, non-conventional functions of nucleoporins, notably in cell differentiation during development, chromatin organization, and mitosis.

Our previous work contributed to the characterization of a major structural sub-complex of NPCs, the Nup107-160 complex (also called “Y-complex“), and to highlight its role in NPC assembly, its contribution to various stages of mitotic progression, and its involvement in embryonic stem cell differentiation.

We are currently pursuing the study of the functions, regulation and direct partners of these nucleoporins in these “unconventional” activities. To do so, we use imaging, biochemical and genetic approaches (CRISPR/Cas9 strategies), in model systems such as human cell lines, but also in pluripotent stem cells (mESCs and hiPSCs) and their differentiated derivatives, including organoids. We are also pursuing studies in to understand the impact of nuclear pore basket proteins on chromatin organization and gene regulation during development. 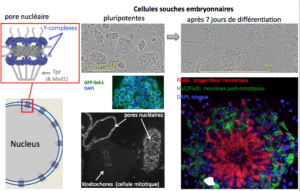 Left: Schematic representation of a nuclear pore and our proteins of interest (Y-complex, Tpr, and Mad1). Middle: Localization of a GFP-tagged nucleoporin (Seh1, one of the components of the “Y-complex”) to nuclear pores in interphase and to kinetochores in mitosis.  Right: cell morphology after 7 days of neuronal differentiation. Note their self-organization in “rosette” structures.

– Nucleoporins in renal and neurodevelopmental pathologies

– Nucleoporins, kinetochores, and the cell cycle

The team has been recognized as “équipe FRM 2020 ” by the Fondation pour la Recherche Médicale and was supported in 2019 by a grant form IDEX Université de Paris. The team has been supported by the Labex “Who am I?”, and  currently hosts in its lab-space the members of the enSCORE facility, founded by the Labex “Who am I?”and dedicated to the development of neuronal organoids