Acquiring new knowledge to decipher how cells divide, which is key to better understand the mechanisms of cancer, a disease caused by uncontrolled cell division.

Humans are roughly built from 10^13 cells corresponding to 200 different cell types. All these cells are generated through cell divisions, starting from a single cell, the fertilized egg. To generate these large number of cells and maintain tissue homeostasis, the human body experiences as many as 10^16 cell divisions in a lifetime. During each cell division, the genome must be faithfully replicated and equally segregated between the daughter cells during mitosis. Defects in these processes can have drastic consequences, leading to outcomes such as cell death, genome instability or deregulated growth, typical of cancer. Despite considerable progress, the mechanisms regulating cell division are incompletely understood. This lack of knowledge has considerably limited the development of innovative therapeutic approaches.

I- Mechanisms regulating mitotic entry in space and time

Commitment to mitosis must be tightly coordinated with DNA replication to preserve genome integrity. Consistently, unscheduled mitosis may contribute to genetic instability. Entry into mitosis is controlled by evolutionarily conserved serine/threonine kinases (Aurora A, Polo-like kinase, Plk1) as well as counteracting phosphatases (PPases). How these kinase activities are regulated in space and time, and how they work in concert to trigger mitosis at the right time remain ill defined. In this context, we are investigating the 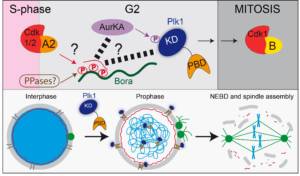 Microtubules (MTs) are dynamic cytoskeleton polymers, which play a central role in cell division, morphogenesis, motility and signaling. Most MT regulatory proteins interact with the plus or minus end of microtubules and thereby control their polymerization and depolymerization rates. However, one class of MT regulator interacts with the MT lattice and severs MTs throughout their length, thereby controlling their size and density in the cell. Three evolutionarily conserved MT-severing enzymes have been identified: Fidgetin, Spastin and Katanin. Mutations of these enzymes have been linked to various defects and pathologies including developmental defects and neurodegenerative disorders. However, little is known about the precise mechanisms by which these enzymes sever MTs. Likewise, how these enzymes are regulated in space and time is poorly understood. We are currently focusing on deciphering the mode of action and regulation of Katanin, which is essential for female meiotic spindle assembly in C. elegans. We are focusing our work on the 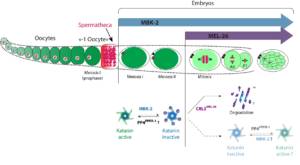 Cullin-RING E3-ligases (CRL) represent the largest family of E3 ubiquitin-ligases targeting the degradation of key cell cycle regulators in space and time, contributing to the orderly progression of the cell division cycle. We are interested in understanding how these enzymes regulate cell cycle progression in a developmental context.