Approximately 15% of couples are confronted with an infertility problem. The potential causes are the poor quality of the germ cells or gametes (sperm and oocyte), or an impaired embryo development. A major challenge in reproductive biology is to understand the mechanisms of these defects.

During cell division, the chromosomes, carriers of genetic information, are divided into two equal sets between the daughter cells. The faithful distribution of chromosomes is a fundamental element of the genetic stability of cells and organisms. Aneuploidy, which corresponds to the presence of an incorrect number of chromosomes, leads to the formation of embryos that are generally non-viable or show severe developmental defects. Our project aims to study the mechanisms that ensure the formation of oocytes and embryos with the correct number of chromosomes, which is essential for reproduction.

Our approach is multidisciplinary and relies on state-of-the-art genetic, biochemical, cellular and microscopic tools. Our favorite model system is the nematode worm Caenorhabditis elegans, which shares the vast majority of its genes and key mechanisms of reproduction and development with mammals. We also study “non-model” nematodes to develop an evolutionary understanding of the mechanisms of cell division in the context of reproduction.

Axis 1/ Meiotic divisions of the oocyte:

In mitosis, spindle microtubules are assembled from centrosomes (Figure 1, yellow). In oocytes, centrosomes are eliminated early on during meiosis. Thus, spindle assembly in oocytes involves atypical mechanisms that are not well understood. We have developed an in utero microscopy approach on live nematodes that allowed us to describe the key steps of acentrosomal spindle formation in the C. elegans oocyte (Video 1).

In order to determine the actors involved, we combine this confocal imaging method with a systematic loss-of-function approach of microtubule-associated proteins and microtubule motors. We also use an in vitro Total Internal Reflection Microscopy (TIRF) approach on recombinant proteins and individual microtubules (Figure 2). Our goal is to determine the network of actors required for spindle formation in the absence of centrosome, as well as to highlight the functional interactions between these actors.

Axis 2/ Chromosome segregation in the oocyte:

Acentrosomal spindles have a characteristic “barrel” shape (Figure 1), with rounded poles, due to the absence of astral microtubules (microtubules that normally connect the spindle poles to the cell cortex during mitosis). This atypical shape induces specific mechanisms of meiotic chromosome segregation. Using a multimodal microscopy approach, combining live optical microscopy of C. elegans oocytes, laser ablation on live oocytes and tomographic electron microscopy, we have demonstrated an original mechanism of chromosome segregation relying on “pushing” forces exerted by microtubules (Video 2 and Figure 3). We combine the different microscopy approaches with targeted loss-of-function of key players to determine the molecular mechanisms. 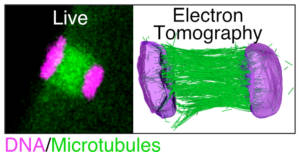 We have also shown that the “pushing” segregation is not strictly dependent on kinetochores, multiprotein complexes that assemble on chromosomes to allow microtubule binding. Nevertheless, these are important to ensure the fidelity of the segregation mechanism and to avoid oocyte aneuploidy. We have recently developed a method of live microscopy of two fluorescence channels simultaneously with fast Z-scan (Figure 4).

Axis 3/ Evolution of the mechanisms of meiotic division in nematodes:

Defects in chromosome segregation during meiosis can lead to aneuploidy of gametes and embryos, which is a major cause of birth defects and spontaneous abortions in humans. However, although essential for the reproduction of multicellular organisms and thus for the continuity of species, the key principles governing meiosis, and in particular meiotic chromosome segregation in oocytes, are still poorly understood. One of the main reasons for this lack of knowledge is the diversity of molecular scenarios that have been adopted during evolution to regulate chromosome segregation, particularly in oocytes. Indeed, although meiosis is highly conserved in eukaryotes, deviations from the “norm” are ubiquitous and may provide important information about the evolutionary significance of meiotic mechanisms. It is therefore of utmost importance to appreciate the true diversity of meiotic features in nature, considering both well-characterized model organisms (such as C. elegans) and non-model organisms. Nematodes represent an ideal situation in this respect: their remarkable adaptability to various ecological niches has been accompanied by extreme plasticity in genome organization but also in reproductive and meiotic strategies. We have recently started the analysis of oocyte meiosis in non-model nematode species with specific and atypical characteristics that may have an impact on meiotic chromosome segregation (Video 3).

Axis 4/ The first mitotic division of the C. elegans zygote:

Kinetochores are multiprotein complexes composed of several dozen proteins. Among these, the kinase BUB-1, the HCP-½ proteins, and the microtubule-associated protein CLS-2, form a module involved in the control of kinetochore microtubule dynamics. We have highlighted the roles of this module in the correct alignment and attachment of chromosomes in metaphase, and in the formation of the anaphase central spindle. We continue to analyze the different functions of the BUB-1/HCP-½/CLS-2 module during the first mitotic division of the C. elegans zygote. For this purpose, we are developing a targeted mutagenesis approach coupled to confocal microscopy on living embryos. This approach allows us to perform a quantitative analysis of the role of the different actors through the various stages of mitosis (Figure 5).