Nuclear Pore Complexes (NPCs) are elaborate structures embedded in the nuclear envelope and composed of multiple copies of about 30 different proteins termed nucleoporins (Nups). Our team aims at characterizing, beyond their well-established function in transport between the cytoplasm and the nucleus, non-conventional functions of nucleoporins, notably in cell differentiation, gene regulation, and mitosis. By elucidating the role of these nucleoporins, our work should contribute to understanding the mechanisms by which mutations or misregulation of these nucleoporins lead to various pathologies.

Nuclear Pore Complexes (NPCs) are elaborate structures embedded in the nuclear envelope and composed of multiple copies of about 30 different proteins termed nucleoporins (Nups). Our previous work contributed to the characterization of a major structural sub-complex of NPCs, the Nup107-160 complex (also called “Y-complex“, Figure 1), and to highlight its role in NPC assembly, its contribution to various stages of mitotic progression, and its involvement in embryonic stem cell differentiation.

Figure 1: Schematic representation of a nuclear pore complex and the components of the Y-complex.

We are currently pursuing the study of the functions, regulation and direct partners of these nucleoporins in these “unconventional” activities. To do so, we use imaging, biochemical and genetic approaches (CRISPR/Cas9 strategies), mainly in pluripotent stem cells (mESCs and hiPSCs) and their 2D and 3D-differentiated derivatives. 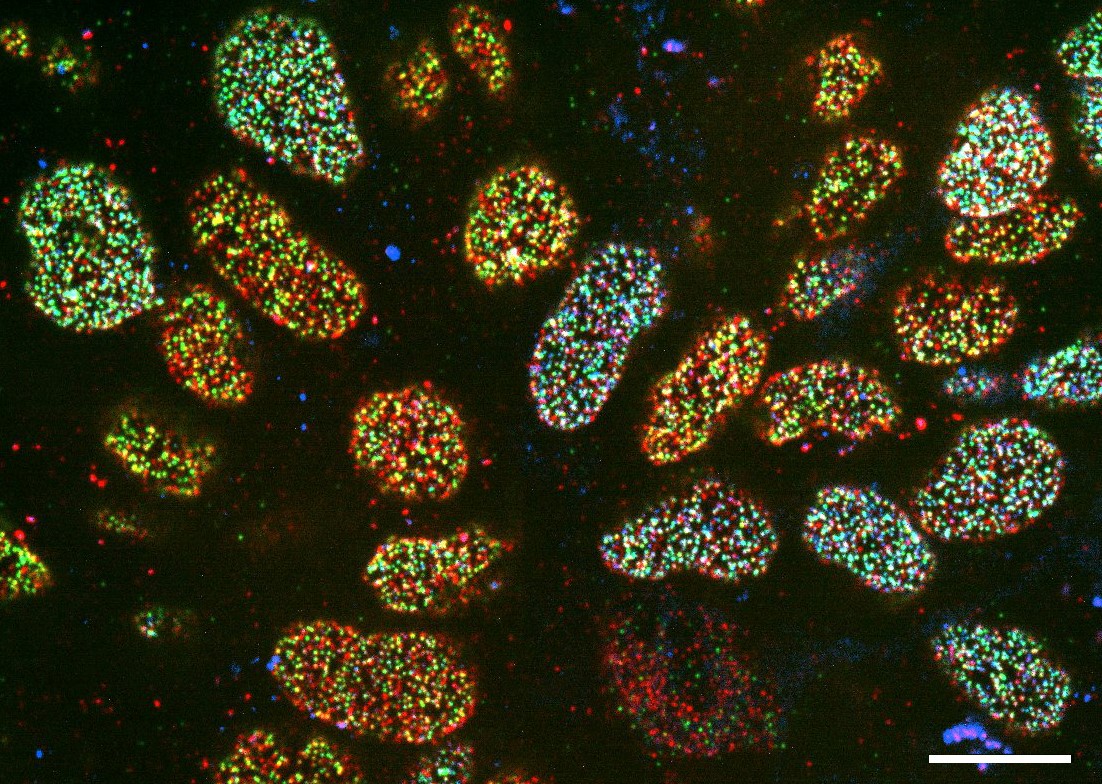 Additionally, an RNA-seq analysis enabled the identification of potential target genes regulated by Nup133 during early steps of neuronal differentiation (unpublished results from our team, collaboration with the Genomics facility from IBENS, Paris, France).  We are currently validating these target genes and characterizing the mechanisms by which the Y-complex contributes to their regulation.

In recent years, several teams have identified mutations in genes encoding structural Nups, notably Y-complex Nups, in patients with an early-onset and severe kidney disease (steroid-resistant nephrotic syndrome, SRNS), and/or neurodevelopmental disorders, mainly microcephaly. However, the reason why mutations in these ubiquitously expressed Nups lead to pathologies mainly affecting the kidney and/or the brain remains a mystery.

To mimic the ”disease” condition associated with distinct nucleoporin mutations, notably those causing SRNS and/or microcephaly, we are using human induced pluripotent stem cells (hiPSCs) generated either from peripheral blood cells from patients with NUP mutations (collaboration with C. Antignac and the iPSCs facility from Imagine Institute, Paris) or from healthy individuals in which mutations are introduced by CRISPR/Cas9-mediated gene editing (with help of the enSCORE plateform – labex who am I?). 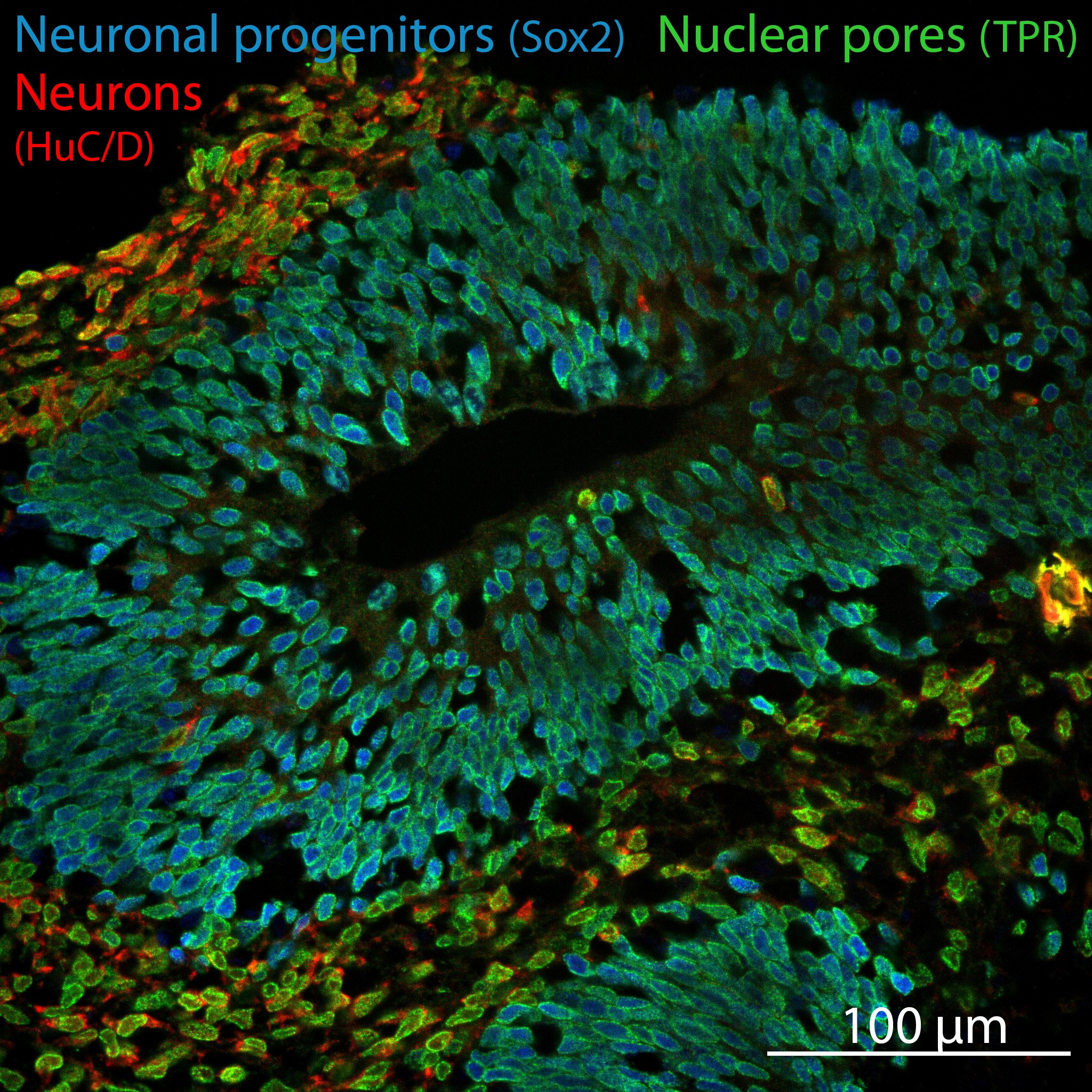 To investigate organ- and cell type-specific and thus pathologically relevant phenotypes, the iPSCs are differentiated towards 3D brain organoids (Figure 3). (with help from the enSCORE plateform) or kidney organoids (in collaboration with C. Antignac and G. Mollet, Imagine Institute).

In both pluripotent cells and their derived organoids, we then study the impact of Y-Nups mutations on NPC assembly, nuclear transport, cell division and migration, and gene regulation. We also aim to characterize Y-Nups partners that may explain the tissue-specific alterations observed in patients.

Figure 3: Cryosection of a cerebral organoids at day 38 of differentiation.

Nuclear pores in development and disease: role of Nup133 in gene regulation upon neuronal differentiation

On the edge between cell division and cell differentiation: role of Seh1 in mouse embryonic stem cells

Implication of the Nup133 subunit of nuclear pores in cell division and differentiation: partners and mechanisms

[Targeting mechanisms of Pom33, a transmembrane protein associated with nuclear pores in the yeast Saccharomyces cerevisiae]

[Involvement of the Nup107-160 nuclear pore complex in mitosis entry, progression and exit]

[Functional characterization of the Nup107 complex: a nuclear pore protein subcomplex in the yeast Schizoszaccharomyces pombe]

The team has been recognized as “équipe FRM 2020 ” by the Fondation pour la Recherche Médicale and was supported in 2019 by a grant form IDEX Université de Paris. The team has been supported by the Labex “Who am I?” and ANR, and  currently hosts in its lab-space the members of the enSCORE facility, founded by the Labex “Who am I?”and dedicated to the development of neuronal organoids.