By studying the assimilation pathways of iron and its intracellular metabolism in a model organism, the yeast Saccharomyces cerevisiae, we can address some of the fundamental problems of biology whilst considering new applications within the field of therapeutics or furthering our knowledge and understanding of the molecular bases of human pathologies.

Indeed, the question of the cellular and molecular mechanisms that are brought into play to control thecellular homeostasis of iron, an element that is essential for cellular metabolism but potentially toxic as a vector of oxidative stress, must be broached in terms of the analysisof complexsystems, which are very sensitive to variations in the parameters that control the responses to either a deficiency in or an excess of iron in the growth media and confer on cells an excellent capacity for adaptation. This adaptation can give rise to responses up to the supra-cellular level, as illustrated by the self-organization of yeast cells into colonies of differentiated morphology according to the bioavailability of iron in the growth medium (see photos)

We are using genetic and biochemical approaches to our studies, but we are also developing the important new methods now available in the field of genomics (DNA chips, Chromatin Immuno-precipitation, high density screening of collections of mutants, proteomic analyses, and measurement of molecular interactions).

Whilst studying the metabolism of iron in the model organism S. cerevisiae, we are also conducting similar work with another yeast, Candida albicans, putting emphasis in this case on the relationship between the metabolism of iron and pathogenicity. C. albicans, which is normally a human commensal, is known to be a major pathogen in hosts that are immunologically or physiologically compromised, and as such is responsible for a large number of nosocomial diseases that are often lethal. 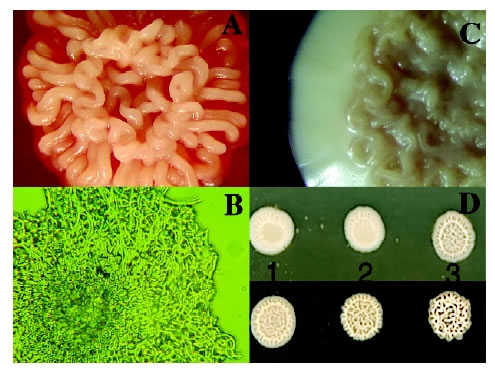