We strive to gain a clear understanding of the profound epigenetic consequences of DNA methylation in a window of development, which occurs in the first week of mouse embryogenesis, and the second of human, but the repercussions of which can ripple throughout life.

Immediately after fertilization, mammalian genomes undergo a dramatic reshaping of the epigenome as the embryo transitions from the zygote into the pluripotent cells primed for lineage commitment. This is best exemplified by DNA methylation reprogramming, as the gametic patterns are largely erased, and the embryonic genome undergoes a wave of de novo DNA methylation. Moreover, once DNA methylation patterns are established, mechanisms faithfully maintain the mark across cell division. Thus, there is latent potential for DNA methylation deposited in the early embryo to exhibit a lifelong effect. 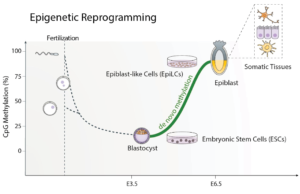 DNA methylation is a modification that is typically associated with gene repression at repetitive elements and at a minority of protein coding genes. We previously described the regulation of the Zdbf2 gene in mice, which is programmed during the de novo DNA methylation program. Challenging the paradigm, in this case DNA methylation is required for activation of a gene via antagonism of the polycomb-group of silencing proteins. If the DNA methylation fails to occur, the gene stays silent throughout life, resulting in a reduced growth phenotype.

It has long been known that DNA methylation at CpG-dense promoters, also known as CpG island (CGI) promoters, is associated with gene silencing. However, the mammalian genome is highly methylated with the exception of CGI promoters. This means that DNA methylation is important for silencing only a small subset of protein coding genes. It is less clear what the function DNA methylation serves in intergenic regions and the bodies of transcribed genes, for example.

One key relationship we are interested in based on our studies of Zdbf2 is the antagonism observed between DNA methylation and the polycomb silencing machinery. We are highly motivated to gain insights into the mechanistic underpinnings of DNA methylation-based gene regulation. Crucially, we want to understand the relevance of non-canonical forms of DNA methylation for development.

In the Greenberg lab our playground is mouse embryonic stem cells (ESCs). ESCs offer a number of advantages for DNA methylation studies: they are resilient to mutations in DNA methyltransferase genes, they are highly amenable to CRISPR/Cas9 genome editing and genetic screens, and they can be readily harvested in high numbers for robust experiments. Importantly, we utilize a differentiation system that recapitulates the DNA methylation reprogramming that occurs in vivo. Much as we did with Zdbf2, findings we make in our cell system will be complemented in mouse models to validate the developmental importance.

We will rely on next generation sequencing (NGS) approaches to gain an in-depth view of DNA methylation regulation. This includes CUT&RUN and CUT&Tag for profiling of chromatin bound factors and targeted deep bisulfite sequencing for DNA methylation analysis. It is an exciting time in the epigenetics field with the emergence of the epigenome editing tool kit. Using CRISPR/Cas9-based targeting, we can explore with precision the function of DNA methylation at a locus-by-locus basis. 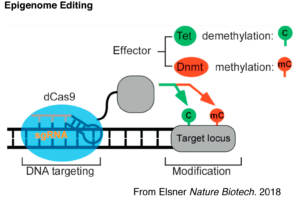 In the future, we are excited to employ genome-wide CRISPR/Cas9-based genetic screens for discovery of novel factors, as well as working with the top line proteomics platform at IJM for mass spectrometry-based approaches. We are always open to new technologies and ideas, so our methods will constantly be evolving! If you are interested in our research and want to learn more, don’t hesitate to contact us!

Support: ERC Starting Grant, ATIP-Avenir, ANR, Labex Who Am I?